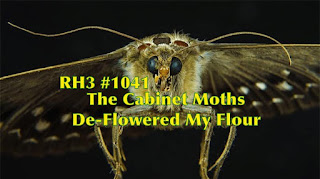 Does anyone remember Marcus Brody from the Indiana Jones movies? He was the museum curator that once got lost in his own museum. If Marcus Brody were a hasher, I think him and Flamer would hang out.... just saying.
Below is the message from our beloved X-GM hares:
What's a winter in Reading without a deathmarch, where -- even though the start time is 2PM, you're warned to bring a headlamp, you know..."just in case". Well, that's the type of hash that Flamer and Decoy had PLANNED. The kind where NFB would be reaching for the oxygen tank and giving us the Roberto Duran "No Mas". The kind where Bad Semen would be complaining (no wait...that's EVERY hash).... but you get the point, right?
In preparation, Flamer went out and bought the best organic flour he could find and stockpiled it in his fallout bunker. Lo and behold 2 weeks before the hash, he discovered that "cabinet moths" (also known as "pantry moths" and "cupboard moths" -- I actually looked it up) had deflowered his flour and used it as their own personal sexpad, creating thousands of new "cabinet moths" with which to some day rule the Earth.
Long and short of it -- that "long arduous winter hash" is a teensy bit shorter. It'll go until Flamer and Decoy run out of flour.
RH3 #1041 The Cabinet Moths De-Flowered My Flour
Join us Sunday January 19th at 2:00 PM at the State GameLand parking lot off Obold Rd in Mt Pleasant (see highly technical map). Prelube at Bluemarsh Cantina.
Hash Cash $6.00.
A-A
Dress Warm, its fucking January.
and.... "Your Comfort is our PRIMARY Concern."
Posted by Reading HHH at 10:23 AM